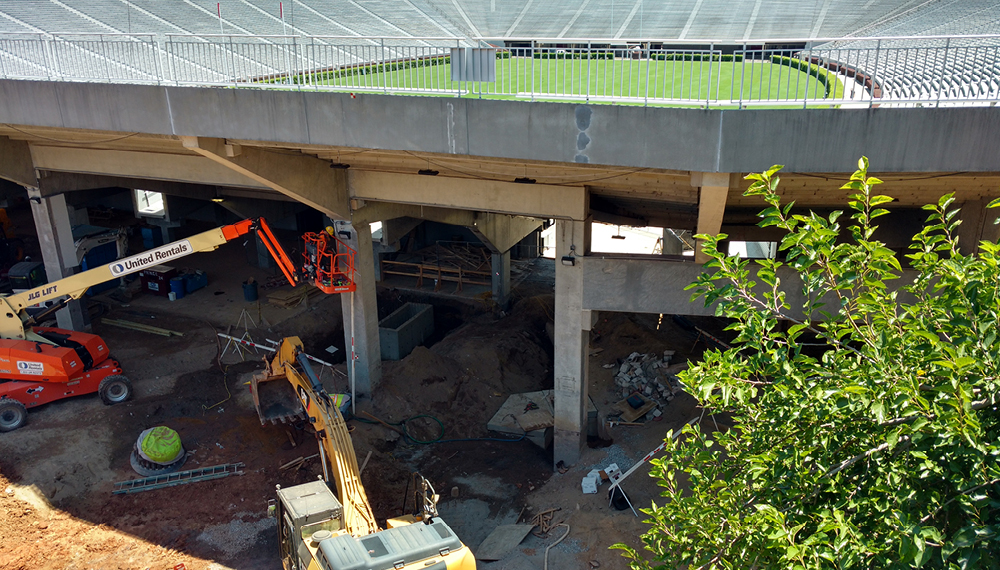 Into the end zone at my alma mater

When the University of Georgia renovated and expanded facilities inside the West End Zone of legendary Stanford Stadium, they faced a major infrastructure challenge: extending steam and chilled water systems from the campus loop to the stadium. A major part of the challenge was routing the system around the Tate Student Center, a highly popular – and highly trafficked – campus venue. Project Manager Jay Weldon, a proud UGA alum, offers his first-person account of meeting that challenge.

Into the end zone at my alma mater

For a lot of reasons, this is a project I’ll always remember.

I graduated from the University of Georgia in 2015. A year and a half later, I was back on campus to supervise a mechanical systems project for Sanford Stadium. I’d spent many Saturdays in that stadium, cheering on the Bulldogs.

UGA wanted to up their game when bringing in recruits on game days. So, they decided to renovate the area overlooking the stadium’s West End Zone. They improved seating, updated the locker room and installed what they called a “recruiting lounge and plaza.” Inside the lounge, recruits can enjoy lunch on Saturday, then walk out the big glass doors onto the plaza and watch the game from the West End Zone.

We worked on HVAC and plumbing for these updates – but the real challenge for us was a major extension of a steam and chilled water system from the campus loop to the building.

The campus has two central energy plants that provide chilled water and a central steam plant to move steam throughout the campus in three loops. Our job was to extend these systems through underground piping from South Lumpkin Street eastward to the stadium. That’s a length of about a football field and a half, straightaway.

Only it wasn’t straightaway. Because between Lumpkin and the stadium sits the Tate Student Center, plus a parking deck and a parking lot. And although we were doing the work over the summer, the university had student tours and orientations going on, and the student center of course is a big part of that. 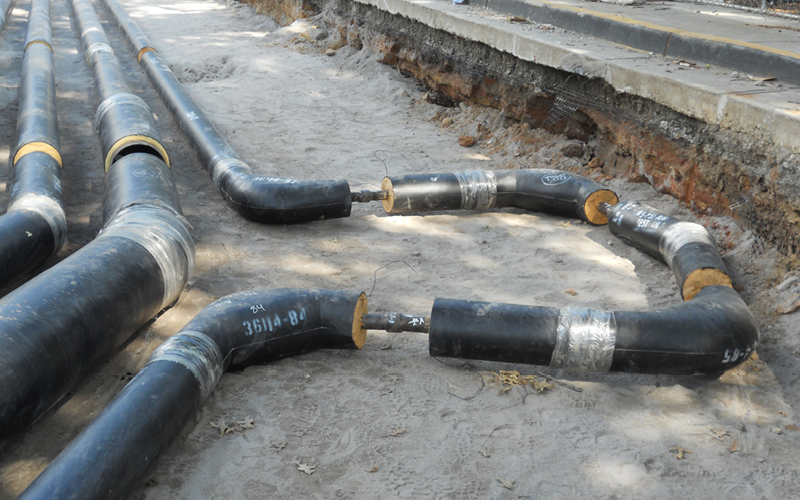 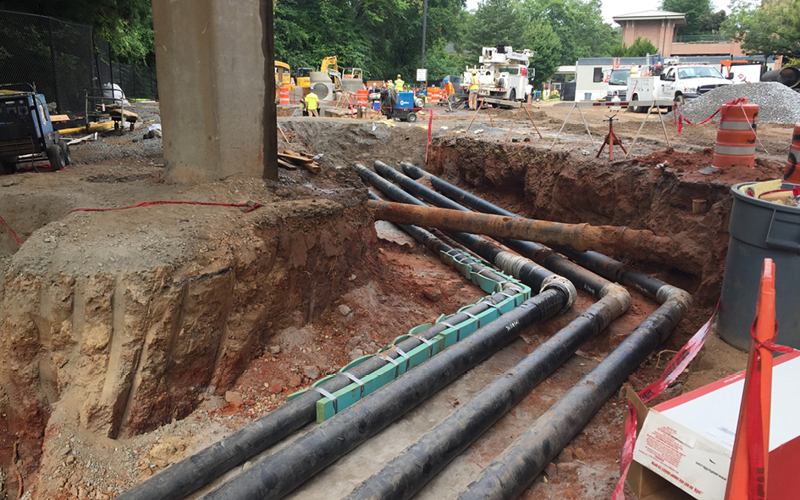 Left, looking east: An expansion loop in the condensate system to mitigate stress on the pipe. Right, looking west: In all, we installed 6,000 feet of linear pipe from campus to stadium.

So, we had to install this array of chilled water pipe and steam pipe, 15 feet underground in places, run it down the driveway of Tate Student Center and into the west end zone building. All in all, about 6,000 linear feet of pipe. That summer of 2017, we had from mid-June to mid-August, and we had to navigate all of our work around a good bit of campus activity. That meant a figuring out a patchwork of road closures, temporary openings, road plates, weather contingencies and night work.

For the underground system, we had to pre-order the pipe. Normally, we’d fabricate pipe for chilled water and steam in our fab shop, but we couldn’t do that in this case. The steam pipe has a carrier pipe with insulation inside of a protective conduit jacket. 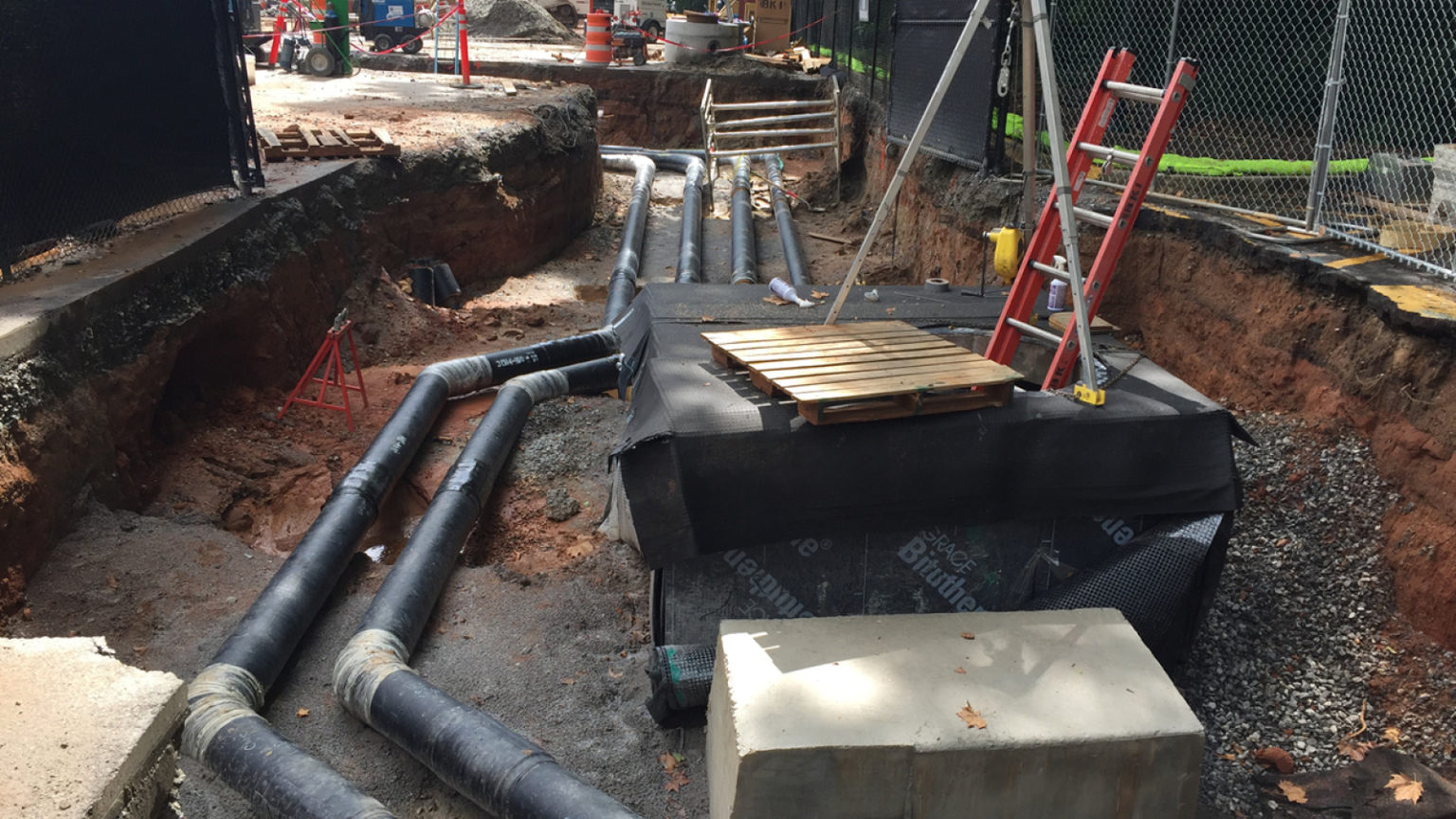 This view of piping underneath the driveway of the Tate Student Center parking lot shows the depth and width of the trench. The parking lot is one of the busiest on campus.

One story from the final days of the project: The trucking company that was supposed to pick up the pipe in Texas didn’t. So we had to figure out a way – fast – to transport it to Athens.

We called around and learned that one of our partners, T&D Rigging, had a truck in Oklahoma. T&D stores a lot of our equipment and provides rigging and other services for us. They sent the truck from Oklahoma to Texas to pick up the pipe.

The driver then went from Texas to Athens, and he was sitting there, at the stadium, at 6 a.m. Monday morning. If the pipe hadn’t been there on time, we would’ve had to store it for the entire football season, then dig up the student center parking lot again after football season.

The next summer was all about our work in the building. We installed HVAC and plumbing for the player and coach locker rooms, concession stands, public restrooms and the recruiting lounge. That was a lot easier, though we still had to figure out solutions to things that came up. Like: How do you install drains into blockouts in pre-cast concrete when they can’t be cast into the forms – and still make the drains not stand out when the concrete is poured back around them? And how do you safely and efficiently route rainwater piping from the top of the scoreboard to protect the electronics?

When I go to games now, as an alum, I sometimes look over at the West End Zone and think about those summers, and the dedication our team put into making this project a success.

One story from the final days of the project: The trucking company that was supposed to pick up the pipe in Texas didn’t. 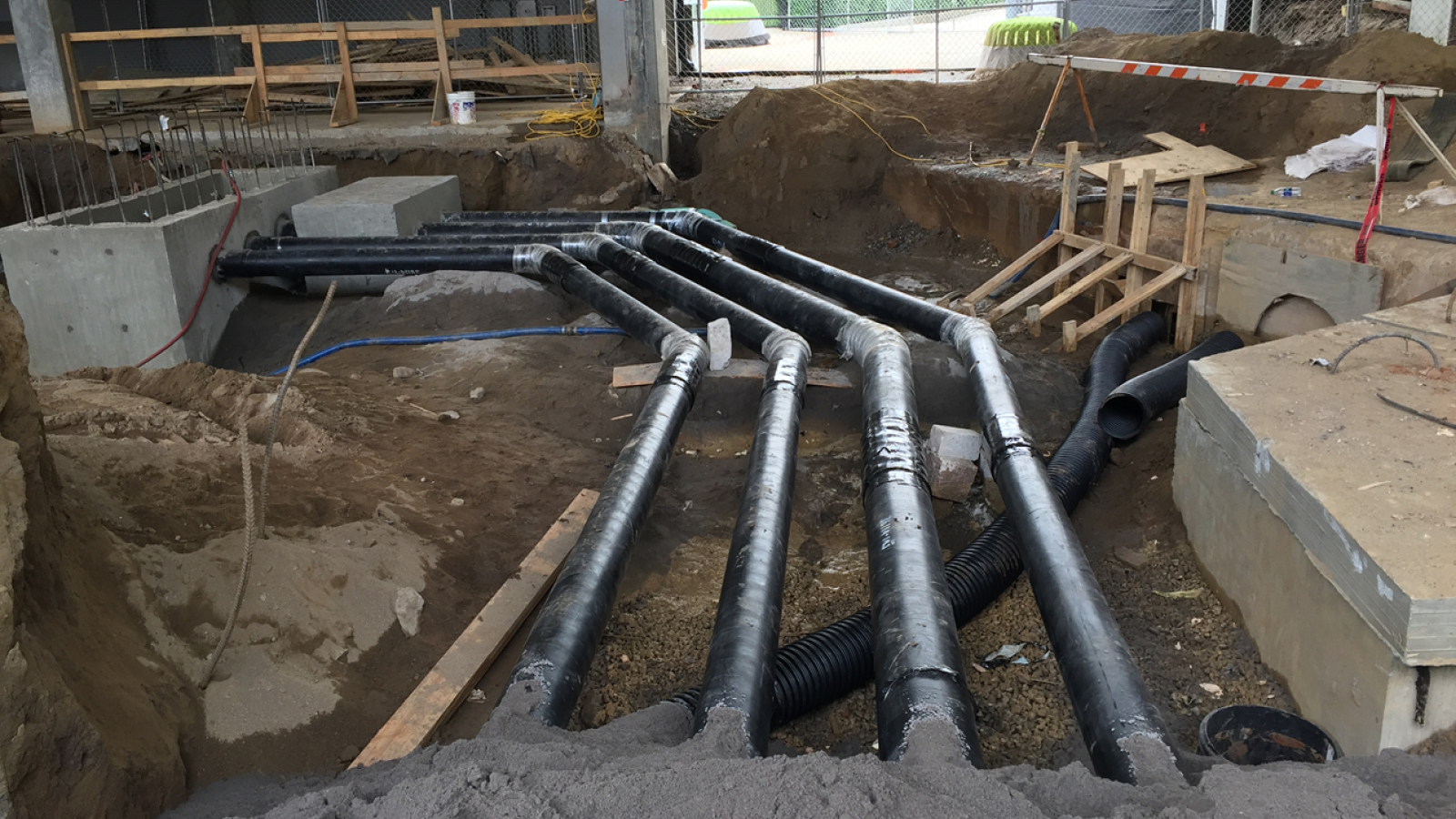 The final run of pipe, as the chilled water, steam and condensate piping enters the new building at the West End Zone. The piping stubbing into the concrete vault serves mechanical equipment that heats and cools the building.